Demand draft is one mode of an instrument payment in banking, which involves both the Drawer and the Payee. The drawer(bank) issues the demand draft which is pre-paid from the Drawees bank account.

However, sometimes complications occur and we are forced to cancel the demand draft because to prevent the pre-paid amount deducted, credit back into the Drawee’s bank account.

Here is the catch, it’s not like blocking a card or requesting a chequebook using net-banking services. But requires a letter to be dropped.

Before starting with the letter to be written to the manager, you need to figure out the exact reason for cancellation, dd number, name of the person, and also your account number to be mentioned.And please also update the styling of the letter as per your needs

Dear Sir/Mam – Change as per your bank manager’s gender

I am one of your [bank name] bank’s [branch name] branch customer and recently bank issued me a Demand Draft on my request. And some of the details as follows, the issued demand draft number – [number], issued date – [date], and the recipient name – [name].

The draft was issued for the [cause of issuing the draft]. But as an update, the draft is no longer needed. So I kindly request you to cancel my current draft as early as possible.

Also, I am ready to pay the charges and paperwork to be done for this cancellation.

What is demand draft cancellation application ?

Ans- This kind of application is sent to the manager of the bank branch when a drawee needs to cancel a current draft before it is deposited into the payee’s bank account.

What is a demand draft number ?

Ans- A number that is printed on the demand draft when the bank issues it. It can be found at the bottom of the draft, with some numbers.

Is DD can be Cancelled ?

Ans- Yes, if there is a perfect reason behind the cancellation it is possible but only visiting the branch using application submission.

Can DD be Cancelled at any branch ?

Ans- No , only that branch can take the request further and has authority from where you’ve purchased the DD from.

Is DD safer than cheque ?

I am passionate about writing and discussing unique topics. 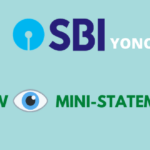 How to view mini-statement in SBI Yono App ?